The 3 Types of Google Apps Users that Need Backup 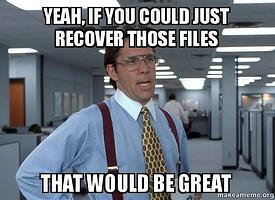 As a Google Apps Admin, one of your jobs is to keep an eye on things that go on with company files. Have you ever had a file or even an entire set of files randomly disappear, never to be found again? This sort of thing can easily be prevented with proper back-ups performed on a regular basis, via Cloud Backup services. So, how do you know which users files to keep a close eye on? Which files should be backed up regularly?

The Over Organized Document Hoarder:  "I know I put the file in that sub-folder"

This person is a well-meaning soul who happens to have tendencies to cleanup and over organize pretty much everything and anything, including business documents and work related files. They view this as a good thing, and in some cases it might be, but things can also turn drastic quite quickly when important or crucial documents are deleted in the blink of an eye.

In addition to re-arranging documents and deleting those that don't look important, the over organized document hoarder makes sure these files are gone - permanently. Caches and recycle bins on their office and home computers are cleared out regularly, erasing any proof the files ever existed. 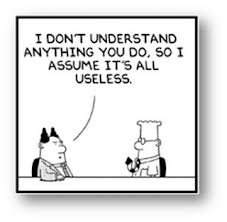 This persona is a bit mysterious, and in many ways the exact opposite of the over organized document hoarder. Oftentimes the magician doesn't quite know what is going on in his or her life, choosing to skimp on the details and not pay close enough attention when it really counts. These people often appear frazzled and are prone to loosing things or missing deadlines.

So, why do the files of the magician need to be frequently backed up via Cloud Backup services? You'll understand why when you meet one. You may become frustrated when files disappear due to the work of the magician, due to this one annoying habit: the delete things and don't know how it happened, or why it keeps happening. Poof! It's vanished into thin air.

Hopefully you don't have any of these nasty little people on your work team, or are in the process of getting rid of them. The jerk is exactly what the name implies, someone that people generally avoid so as not to risk getting burned. This guy or gal may not seem dangerous when it comes to company files, but the truth is they may be the worst of all.

You see, at some point the jerk is going to feel the need to step out on the company and call it quits, or they'll end up fired before the have the chance. Upon resignation chances are the jerk will feel the need to delete each and every one of the company files on their office desktop. Game over.

Though it's not entirely a bad thing to have any of these three individuals on your team, chances are at some point a valuable work file or two will go missing.. and they'll be one of the culprits. Prevent a tragedy like this by being a responsible Google apps admin and using Cloud Backup as often as you think appropriate in situations like these. Doing so could prevent a business catastrophe from happening in the upcoming future.