Summers' School for Google Apps is in Session. 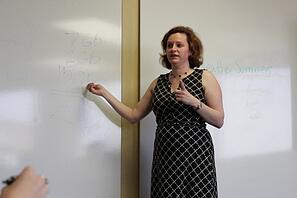 Coolhead Tech isn’t afraid to tap talented people where it finds them. From the Google Apps and marketing interns to employees who instruct business groups on using Google Apps in their work, Coolhead is finding talent. Chris Alghini, Coolhead Tech’s founder, connected with Heather Summers on LinkedIn.

Heather Summers initially majored in English, but as she went through her classes, she began realizing she wasn’t cut out to teach children. “I did take a great class in college called Instructional Technology which taught how to use technology in the classroom. I also subbed while I was attending A&M at a Technology high school in Bryan, where I got to sub in a PowerPoint class.”

Post-graduation, Heather found a job with an ad agency and began working in the agency’s Teleresources group.

While employed there, Heather took advantage of the opportunity for classes that would help her in her job. Among her new skills: Filemaker Pro where she began creating databases. “I began taking classes at the ad agency and discovered Filemaker Pro. I asked the computer instructor how she got into her career and off I went. I have spent the last 20 years being a Microsoft Office trainer. For the last four years, I have been training people on Google Business Apps.”

Chris located Heather through her LinkedIn profile, where he approached her. Chris had a Google Apps training planned, but his intern was out sick. Because he needed someone to help with the training, he asked Heather to help him out (as it turns out, Chris would normally do the training, but he was needed to help with the migration). This meant Heather covered the training. After that session was over, Chris and Heather realized just how well they worked together. From there, Chris decided to begin a regular training initiative.

When asked about the observations Heather has made about Coolhead’s current class of interns, she said, “I have been very impressed by Chris’ rapport with the Interns.” 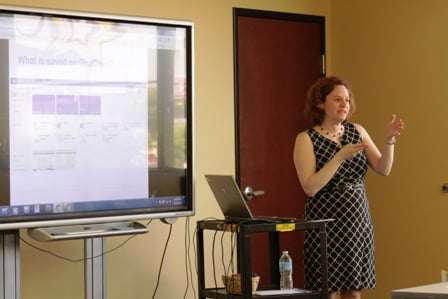 Chris has begun a training initiative for all of the Google Apps, which include Gmail, Google Drive, Calendar and Google Docs. This training includes learning how to take advantage of Hubspot’s marketing software, which enables businesses to create websites, manage social media and email marketing. Heather pointed out that, “there isn’t any formal training for Google’s Business Apps” like there is for Apple and Microsoft at their stores.

It is Heather’s job to show business people how to make the transition from Outlook over to Gmail. She also shows them how to use extensions found in the Chrome Store so they can learn how to use Gmail for work. Coolhead Tech is starting their training initiative this month with an introduction to the Business Apps. The focus will be on Calendar and Gmail. Interested people can find advanced classes for Gmail, Calendar, GDrive and Docs on Eventbrite. Chris and Heather hope that, eventually, they’ll be able to offer these training classes monthly.

Heather sees Google as the future. “I tell people all the time that Google is taking over the world. There is a reason they are moving into fiber and that they bought Nest. They want to be your utility company in the sense that everyone in the world is using Google for something.”