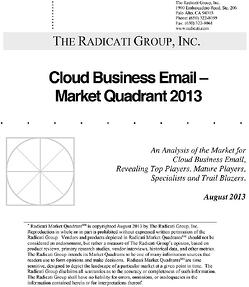 Google Apps is ranked 9 in Functionality and 1 in market share.   Did Your Email provider make the quadrant?


The Radicati Market Quadrant shows two features of the company:

With regard to the key market quadrant trends, Google, Microsoft, Silversky and Intermedia rank as Top Players in the Cloud Business Email market. Google offers Google Apps for Work which is a fully featured cloud suite offering email, productivity tools, cloud storage and document editing along with real time communications. Google Apps for Work was built from the ground up as a complete could-based service allowing organizations to avoid costly set ups and maintenance fees of desktop components accompanied with cloud email services. Google Apps is ranked 9 in Functionality and 1 in market share. Their key strengths are:

Microsoft Office 365 is based on Microsoft’s 2013 server technology which also includes Microsoft Exchange 2013, SharePoint 2013 and Lync 2013. Microsoft integrates SkyDrive and Microsoft Outlook Web Apps where it reigns in its popularity. Some of Microsoft's key strengths are:

Intermedia offers highly customization services to SMB sector with its Office in the Cloud and its email related services. It also extends a choice of Microsoft services like Microsoft Exchange 2010, 2013, SharePoint 2010, 2013 and Lync 2010 and 2013 with varying functionality.

Trail Blazers have the following services under its umbrella in the Radicati Market Quadrants:

While the Mature Players are: